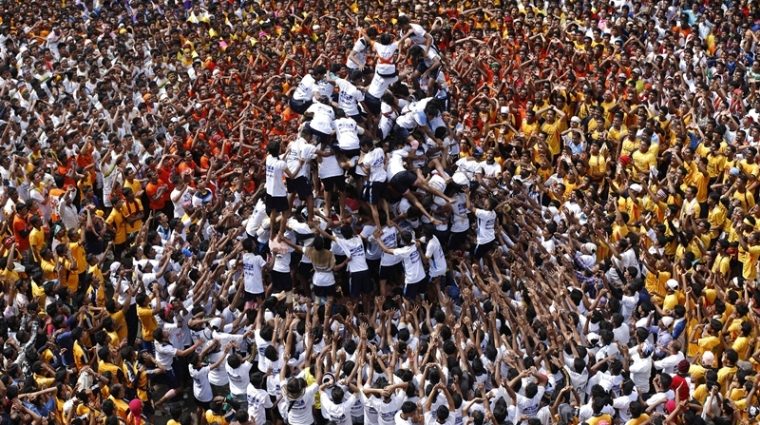 Dahi Handi at Worli Naka: Gap Between Promise And Delivery

The Dahi Kala Utsav, 2018, Worli Naka − the atmosphere was zealous and lit up. It was a HinduMuslim joint celebration where prominent politicians rubbed shoulders with foreign visitors, particularly from Spain, and Govindas were seen flocking in teams from different parts of the city, to take part in the human pyramid formations and win prizes. A fair proportion of the teams who took part were Muslims. In fact, Hindu-Muslim unity seemed to be the theme of the event, as team members worked in complete harmony with each other, to prepare the base on which the pyramids would go up.

The event was organized by Sunil Rane, General Secretary- BJP Mumbai, and BJP Vidhan Sabha Worli. It included prominent guests like Datta Rane, former education minister of Maharashtra. Last year around 250 teams had participated. This year, approximately 300 teams and 20 women teams were expected to try their luck to win the prize money. The BJP Worli Vidhansabha has been organizing the Utsav at Worli Naka for the last 18 years. Interestingly, the event also attracted members of the Spanish consulate, who were present along with an office bearer from the Barcelona Football Club. Rajesh Kamli, BJP Vice President, South Mumbai, said that this time the organizers have decided not to choose a winner in order to keep the event low-key, so as to pay homage to the former Prime Minister of India, Atal Bihari Vajpayee.

Instead, they gave each mandal that managed to put up a pyramid and salute (salami) a token of Rs.500 and Rs.1000, depending upon how many tiers they could form. Last year, the winning team received Rs.55,000. Though the police and the organizers commented that the loud music would stop at 10 pm, a conversation with the locals told a different story. Anika Aunhar (40) who lives in Bhivandivala building, across from where the Dahi handi is always tied, said that the music does not stop before midnight every year. The DJ of the event, Vinod Saunko, (21) said he had been paid to play till midnight. By 3 pm the Dahi Handi was already set up at 6 stories (approximately 50 feet), the music was blaring from the loudspeakers, police personnel were at every corner of Worli Naka, people had already begun to spring up and crowd around the location, waiting to welcome the Govindas. Worli Naka turned into a parade of different teams, excited to showcase their talent. The first Mandal to give salami to the ‘Dahi Handi’ was the ‘Chava Yuva Mandal’, but none of the participants were wearing any safety gear as per the rules and regulations stated by the Bombay High Court.

As different mandals followed, it was clear that only a few of them were following the safety regulations. Most of the mandals were able to make a pyramid of 5 levels or manoras, but very few were able to reach the dahi handi. Unfortunately, an hour into the event, traffic on both sides of the road had been interrupted inspite of the best efforts of the police. The govindas seemed to have decided they were in charge and created a ruckus in the middle of the road. Few hours later, one member of the Navratan Mandal, in an attempt to make a 6-level pyramid, lost his balance and fell. He seemed to have fainted but no medical help was provided.

His team-mates fanned him back into consciousness. The negligence from both the organizers and teams was quite evident but this didn’t dampen the celebrations. The love for this religious event and the enthusiasm to celebrate the festival is unparalleled and the intensity of it only seems to be increasing with each passing year.

Latest posts by spiceenquirer (see all)
2019-07-18
Previous Post: The man who aims to change the landscape of Dharavi
Next Post: Fragile. Handle with Care