Independence survey shows we have a long way to go

As we get ready to celebrate our 73rd Independence Day in a few hours, we have discovered that people are pretty clear about what they love about India – unity, diversity, a sense of community.

Ironically, what they do not like stems from the same factors, lack of unity, intolerance towards diversity, lack of accountability and a sense that…..

A consultant for small and medium enterprises, Pranav Desai much to say about the heritage and culture of the country. He also believes the unity amongst people is impregnable during any emergency. Change has always been a constant in our ever so dynamic nation, he feels, adding that the next generation is more accepting of change.

About the negatives, Desai said that the civic sense prevalent in the country, is poor. He also went on to mention that there is a lack of accountability among citizens.

Pay teachers more, he feels, if you want education to improve the education system, pay the judiciary more, pay the police more. This, he says, will bring order and peace to the society.

A student counselor at St. Paul’s Institute of Communication Education, Rochelle believes that there is immense diversity in culture, heritage, habits and physical appearances of Indians. She acknowledged the existence of the unparalleled level of craftsmanship, particularly stating that foreigners from other countries are big fans of our fabrics and showpieces.

She deplored the erosion in personal freedoms pertaining to food, clothing and entertainment, while adding that freedom in speech is one of the casualties. She concluded by saying that the disaster management in our country is pathetic.

Harshit is an employee of an MNC in Worli and is proud of the mixture of various cultures in our society. He also loves the general perspective on the importance of equality and deplores the fact that a few people cannot accept this. But he is most proud of the way we have achieved our present level of economic stability. Look at the way the British plundered India, he declares and still we are a globally recognized power.

However, Harshit believes that communal hate is a major problem in society now. People are afraid to voice their views, fearing the repercussions and consequences of being questioned by people in power. Corruption levels are still high, leaving the middle and lower class to suffer the lack of basic necessities.

As a responsible citizen of India, this young man vows to pay his taxes on time, aid and promote cleanliness in the city, and contribute to the economy with his information technology expertise.

resident of Karnataka, Prashant praised the government for reducing BEST bus ticket prices in the city. He also spoke proudly of free health insurance policies issued by the government, and the recent scrapping of Article 370.

When asked about the drawbacks, Prashant said that the infrastructure is substandard, causing frequent traffic jams, the local trains are over-crowded and the garbage in the city is a real health hazard.

Latest posts by spiceenquirer (see all)
2019-08-15
Previous Post: The things that make us proud about Bharat Mata
Next Post: The BP Oil Spill in the Gulf of Mexico: How Not to Handle a PR Crisis 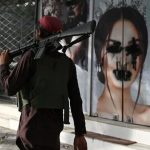 Taliban: The return of the Warlords

For years, the soil of Afghanistan has been soaked in blood by