Mumbai, March 7: Most women in Mumbai are still unaware of the Nirbhaya Squad, an initiative by the Mumbai Police on eve-teasing and sexual harassment, launched on January 26. In order to address this, a group of NGOs got together at the Birla Garden, Juhu on March 6. The idea was to create awareness on various crimes against women and to mark International Women’s Day celebrated globally every year on March 8.

The Nirbhaya Squad formed on September 14, 2021, was the result of the brutal rape and murder of a women in a stationary tempo at Sakinaka on September 10, 2021. The victim was brutalised with an iron rod and later succumbed to her injuries, in a manner similar to the 2012 Nirbhaya rape and murder case in Delhi. The squad was later officially launched on January 26, 2022 by Maharashtra chief minister Uddhav Thackeray, along with Home Minister Dilip Walse Patil.

The Sakinaka incident had created an uproar that led the Mumbai Police to start 91 Nirbhaya Squads with specially trained officers who will be patrolling and deployed across Mumbai.

Poonam Mirgane, police sub-inspector (PSI), Juhu police station, led the event by saying that the motto of the Nirbhaya Squad is to make women feel they are never alone. The issues of eve-teasing and harassment are mainly seen in locations which are lonely, quiet and dangerous.

“There should be a fear of Nirbhaya Squad in every man’, said the PSI. Each Squad consists of two women officers and an additional eight officers, both men and women combined. The PSI further added that every Mumbai police station has one. Currently, there are 91 police stations and the strength of Mumbai police is 1,95,000 of which women comprise around 7.25 percent, which is very low. The ideal, according to recommendations, is 33 percent.

She also spoke on sexual harassment of any sort either physical, verbal or cyber, adding that if the victim was below 18 years, the stringent Protection of Children Against Sexual Offences (POCSO) Act must be added.

Nidhi Chaturvedi, 47, a fashion designer and a social worker who co-organised the event with the NGO Global Women Power and NGO Seva Aur Sahyog, endorses the awareness for women’s safety. She also runs an online platform for social causes, the Juhu Versova Andheri (JVA) Citizens Welfare Group, where citizens can put in their grievances for escalation to MLAs, corporators, and the government for solutions.

Amongst various grievances registered, she shared two incidents that were taken up by JVA of a senior citizen who was harassed by an old man in November 2021 and a TV actress who received threat calls in December 2021. Both were resolved by the Nirbhaya Squad who reached the senior citizen’s house within five minutes and later warned the accused.  In the second case, the accused was arrested within seven days.

Chaturvedi said that Mumbai has always been a safe city, but after the Sakinaka incident, Mumbai Police has been diligently taking constructive steps to create awareness about the Nirbhaya Squad by creating WhatsApp groups, going to schools and colleges, and even giving their personal contact numbers. She added that the police could do more to make a complainant feel safe and comfortable.

Aamir Dalvi, the actor, said, “‘We need to teach the boys at home to see things differently as still the culture and society is not yet very accepting. If a man is pulled up for any harassment, then his immediate defence mechanism is that the women instigated him. So, we need to develop a culture of educating the boys”. He was answering a question on whether women’s lifestyles were a reason for increased crimes against them.

He suggested, however, that women be aware of their environment and keep their personal contacts informed of their whereabouts, to learn basic self-defence and have an emergency call button. ‘The Mumbaikar spirit is very good and when you shout, there are people to help and protect you, he said.

Sharbani Mukherjee, actress, said that women shouldn’t be expected to change their lifestyle to protect themselves and should do what they are comfortable with.

She further added that Mumbai is safer as compared to other cities and that the Mumbai police has created a vibe that women feel safe. However, police can create more awareness and approach educational institutions and train the girls in the art of self-defence. This will help the girls to safeguard themselves as every minute counts until help reach out to them. 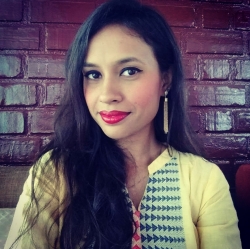 Anisha Choudhary
Anisha Choudhary is currently pursuing her Post Graduate Diploma from SPICE. She is passionate about politics, crime reporting and loves to be in the thick of the action when it comes to reporting sensational news

Latest posts by Anisha Choudhary (see all)
2022-03-09
Previous Post: 2022 – The quintessentially perfect year or not?
Next Post: How farmers are doubling their income through FPOs