The first time I met Kanchan Bhattacharya, seven years ago, was something of a shock. I was expecting someone a bit tough, as befitted a woman famous for being the first woman IPS officer in UP (home of misogyny,  patriarchy, feudalism, regression, take your pick), the second woman IPS officer in the country after Kiran Bedi, the first woman to become the DGP of Uttarakhand.

I was also curious to see the woman who inspired the television serial ‘Udaan’ in 1989, directed by Kavita Chaudhuri who played the lead and literally rocked it in a performance lauded for its empowering message, conveyed without the shrill hysteria and overloud histrionics that characterizes Indian drama on both big and small screen. It was a show that had a huge audience that closely followed the trials and vicissitudes of Kalyani Singh who became an IPS officer in large part to ensure that her beloved father could get the justice he deserved in a land dispute reflective of the mores and mindsets of the Hindi heartland. It was also pretty much the early story of Kanchan Bhattacharya, Kavita’s sister.

She walked in, dressed in flow-y fabrics, her outfit conveying an untrammeled, layered look with which I was to become familiar over the years. Retired from service in 2007, now resident in Mumbai, I never saw her in a uniform, but one look at her pictures, and it was as if Kalyani Singh had come to life through her sister! And yet she couldn’t be more different from the screen portrayal.

A part of the tiny and fiercely-guarded Book Club to which we both belonged, meeting once a month to talk about our reading, time and again she made us marvel at her outlook on life. She seemed so wide-eyed about life and its experiences that at times she exasperated. I suspect that was partly because she made us seem such hard-bitten wretches in comparison.

Time and again we would turn to her for vindication about our opinions on the general state of policing in this country. Time and again she would contradict us – always sweetly, sometimes inflexibly. You cannot make sweeping judgements, she would say. I know there is corruption, I know there is very deep rot in the police, but not all are bad. Time and again, irately we would scold her on her seeming naivete. But as things turned out, she had an extraordinarily gentle view of life, all the more rare, considering her professional background.

Sad books, violent stories, the rough and rumble of life depicted a little more clearly than it needed, books with heroines bound for a bad end, all upset her. Can’t we read something a little happier, she would say plaintively, as it is life can be so ugly. But Book Clubs read pretty much everything, if not together then individually, like we did.

We read Norwegian writer Jo Nesbo’s “Macbeth”, a best seller based upon a thoroughly dystopian view of a vaguely Scottish world that was dark and destroyed. Surprisingly Kanchan read it without murmur. But then Macbeth was not just a riff on the Shakespeare fellow but a tormented police officer in his own right and the protagonist of the book, and she had read it not just as a story but a police procedural as well.

We met to discuss it at the Birdsong Café on the beautiful Waroda Road in Bandra, and we hung on her words as she spoke about similarities and differences, and she was the undoubted authority. Still, she didn’t particularly like the book, except that it made the Indian policeman look tame in comparison.

It rattled me at times, the way she seemed to marvel at the experiences that our jobs sometimes threw up, to the extent that I thought it was a sendup of sorts. After all, she was the one who had been exposed to the rough and ready in life through a long career punctuated by awards for this, awards for that. Personally, we felt that all women in the IPS deserved awards as big as donner plates, but even here, Kanchan was a trail-blazer. That she stayed so grounded and so diffident was a marvel.

What was absolutely not a surprise was her announcement to us that she was going to fight elections from the Aam Aadmi Party for the Haridwar Constitutency in Uttarakhand in 2014. We just could not see her with the major parties. Not after her concern for the little person, the vulnerable, for those who needed help. We followed her progress keenly, the gallant figure with the Aam Aadmi topi on the head

On June 25 of last year, we received the picture that was to lead to the long/short road to her death. Long in the sense that we expected her to recover. Short in that, this time last year she was still so perky, still sending us messages on our Whatsapp group.

But the picture. It showed Kanchan lying on a road, her knees bent, her head on her handbag. She looked very composed, comfortable even. Before it came, however, there was a message, casual, almost throwaway at 4.18 pm. Girls, it said, I’ve fractured L2 and am in hospital. In dun. Will share details later.

And when this set off an absolute flurry of concern, with messages criss-crossing each other, there came her picture at 5.09. Concern and cross messaging went through the roof. In all this, we just wanted to know who was taking care of her till her frantically-concerned family took over.

Back in Mumbai, following complications, she missed them all. Now we will have to settle with her being the unseen member at each one. We’ll miss her. 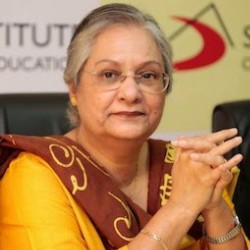 Carol Andrade
Carol Andrade is a journalist and a media educator with a twisted sense of humour. Read her on carolandrade.in