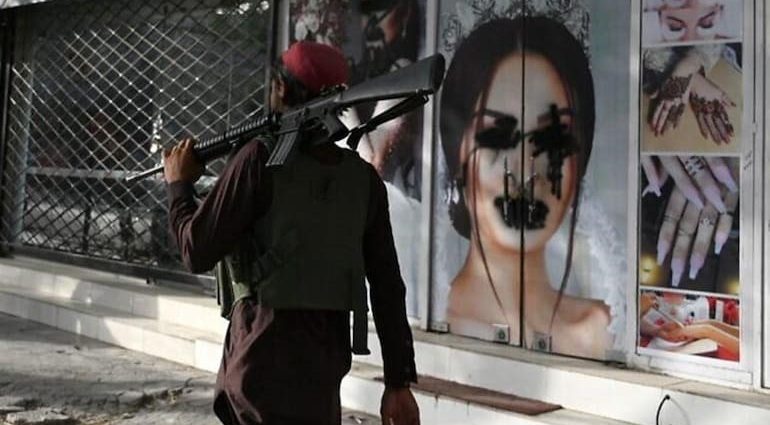 Taliban: The return of the Warlords

For years, the soil of Afghanistan has been soaked in blood by the Taliban. From 1996 to 2001, the people of Afghanistan were snatched from peace and freedom by the war between warlords and the Taliban. Many Afghans fled from their lands to seek refuge in neighbouring countries but it was the women who suffered the most. For women, it meant  a colossal damage to their basic rights and civil liberties.

Ironically, the attack on the World Trade Centre led to the invasion of Afghanistan in 2001 by the US who were in search of the perpetrator, Osama bin Laden, who had been given refuge in the country by the Taliban. That story ended in 2011 with his killing by US special forces in Pakistan’s Islamabad. For Afghans, however, who have suffered for decades, first under the Russian boot and their own warlords, and finally the Taliban, this marked a period of relative calm and prosperity.

The whole world has been following developments in Afghanistan as the US forces prepared to leave the country. After 20 years in Afghanistan, in February 2020, former President Donald Trump announced the withdrawal. Since then, the Taliban has carried out a gradually-increasing battle with the Afghan National Forces which have been trained by the US. On August 15, Kabul fell to them even as the Americans were pushing to get out by August 31.

There is also no need to recount what has been happened in that country since then, as terrified Afghans try their best to get out. The scenes at Kabul Airport have been particularly frightening with desperate people clinging to planes as they take off and even falling from the sky!

The “Taliban will kill us”: SOS from the people of Afghan.

But it is the effect of Taliban rule on women that has been most horrific and is likely to be even worse. Under Sharia rule, their condition is truly bad. This includes bans of various kinds on their movements, their right to education, wearing a burqa at all times, never going out unaccompanied by a male relative, and, more or less, being invisible in society, economics and politics.

Under the old Taliban, women were flogged for various offences under Sharia law, and also executed.

And at least one video has surfaced of a Talibani laughing at the very thought of a government that is not only democratic but also has room for women politicians.

The whole world knows the story of Malala Yusufzai, shot by the Taliban in Peshawar when she was just 15 for daring to speak out about a girl’s right to education. It was the joint efforts of several countries that resulted in her life being saved, the relocation of her family from Pakistan and her evolution into a Nobel laureate and staunch supporter of the rights of women and children, especially under Islamic law.

Stories abound on the internet, of the atrocities inflicted upon women by various Islamic terror groups, especially ISIS and Al Qaeda. But the Taliban also did not lag behind in these areas. Forced marriages, sexual assault and slavery are some of the atrocities women faced. They could be facing these again now.

Zabiullah Mujahid, the spokesperson of Taliban, has said that women’s rights will be protected and they will be allowed to work with the men, but under the framework of Sharia Law. How that will turn out remains to be seen.

The Guardian reported a women journalist saying that they are already receiving death threats from the Taliban and are keeping a low profile by destroying their online presence and records. Universities are closed and girls have been sent back to their homes. The new leaders has reportedly abducted some women.

So far in its history, Taliban rule has always been a graveyard for Democracy and Women Rights. In its present avatar as a government which requires to build bridges with nations all over the globe, it may hesitate to be as bad as it was, at least at the beginning. But even if it is not as bad, women are bound to suffer.

That is the Taliban way.

Latest posts by spiceenquirer (see all)
2021-09-02
Previous Post: The great tale of Covid-19 is an unending one.
Next Post: Why is International Day of Peace Important?