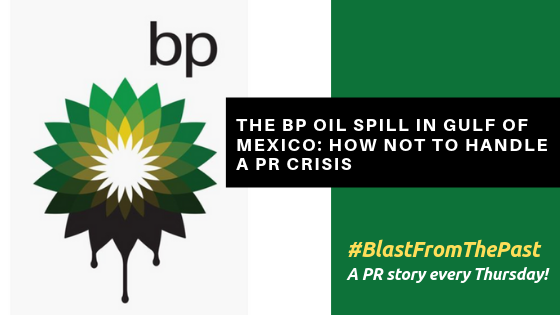 The BP Oil Spill in the Gulf of Mexico: How Not to Handle a PR Crisis

Welcome back to the #blastfromthepast series. Last time we saw how Johnson & Johnson handled the crisis of an ill-fated attack on their reputation. This time we will look at a story which literally blasted the reputation of a petroleum giant and such was the effect of this event that it not only damaged the brand but numerous lives and the environment.

Let’s fly back in time to April 20th, 2010. Deepwater Horizon, an ultra-deepwater semi-submersible oil drilling unit in the Gulf of Mexico (few miles southeast off the Louisiana coast) owned by Transocean Ltd which held the contract for drilling for British Petroleum(BP) suffered an explosion. The rig suffered a blowout which made the internal systems to explode causing massive leakage of crude oil. The BP-owned project had been under the safety radar and a number of threats, fires and similar incidents were reported which jeopardized the safety since quite some time. And it was about time the mishap occurred and took a heavy toll. 11 of the crew members on-board died and many were injured. The blast was just the trigger to what followed as one of the biggest man-made disasters. As of April 22nd, 2010 the US coast guard reported that rig leaked crude oil at the rate of 8000 barrels a day which approximately sums up to 13,00,000 litres of crude every day. Such a massive amount of crude dispersed over 6500 to 176,100 sq.km (approx.) area of water mass for months paved way to the severe environmental consequences that followed. The spill area was home to thousands of varieties of marine arthropods, fishes, ocean birds, corals and other marine mammals. Not only were their habitats inhabitable anymore but also the carcinogenic compounds from the crude deteriorated their lives and population. Before the damaged oil well was capped, it spilled nearly 4 million barrels of crude oil into the vast sea.

PR crisis management steps by BP and its failure

What transpired post this disaster went down to the textbooks of how not to handle a PR crisis. The British Petroleum were reckless and arrogant in their approach and started playing the pass-the-blame-game for this disaster. They not only blamed their contractors for this disaster but also released callous statements. In a series of insensitive statements, the then BP CEO Tony Hayward was all wayward and he said, “There’s no one who wants this thing over more than I do. You know, I’d like my life back.” In another statement, Tony is marked saying that the environmental damage due to the event was “very very modest!” Glenn DaGian, one of BP’s senior consultants who had retired a year ago of the mishap remembers how he was yelling at the TV sets when the first set of response from BP was out. Not only that he even figures out one of the major reasons of this PR mishap was the fact that Tony Hayward had cut BP’s public relations team to reduce costs.

So BP was clearly missing out on the most important step in PR that is to stay prepared. Provided their industry and the risks that keep hovering around them plus the warnings they had already got, BP should have been well prepared for something like this; but they weren’t. The PR model that they used to diffuse the situation was two way and asymmetric where they thought they will be able to calm the raising fingers with random/manipulated information they put out in the public.

Moreover, BP tried to keep the public in shades by provided information which either wasn’t relevant or was false altogether. They weren’t sure about the amount of oil spill, the numbers associated with the damage and they kept manipulating the masses. They were uncomfortable to handle the blame and very uncompassionate in understanding the environmental damage they have caused.

They did sack Tony Hayward after his reckless crisis approach and gained some support when Bob Dudley took over. They quickly ran independent fundraiser by creating rigorous ads featuring Gulf natives and covered about $20 billion. They tried building the goodwill to cover up the previous PR failures and took to their social media to reach the masses with the right message.

Even though BP got late praises and did a lot of cover-up campaigns, the losses incurred were huge. This whole oil spill fiasco had cost them a whopping $41 billion (approx.) over time and they are still recovering from the losses.

Instead of being reckless in their immediate steps of crisis management which actually sets the tone for the whole patch up, BP should have approached a more careful and sensitive way of dealing with the events. They should have taken into account all the key stakeholders in the disaster like the environmentalists, the industry experts, the organisations involved, government and of course the people. They should have engaged with the people more to let them have an impression that BP cared about the damage that has been done and they own it. They should have carried out events and programs to pass out information more transparently, which they eventually did to make the impact less stressful. In my opinion, this particular crisis was a very severe case scenario which not only damaged the reputation but also damaged life and property.

What do you think about this literal blast from the past by BP? Let us know in the comments section!

Latest posts by Raman Kumar (see all)
2019-08-22
Previous Post: Independence survey shows we have a long way to go
Next Post: The Man Who Made The Tide Turn – An Interview with an Environmentalist