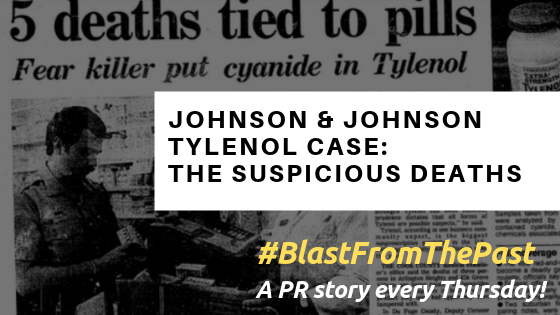 Crisis! The Oxford dictionary explains that a crisis is a time of great danger, difficulty, or confusion, a time when problems must be solved or important decisions must be made. And just like people, brands and organizations also have their own fair share of problems and crisis situations. It takes years for a brand to build a reputation for itself and just one mistake for its entire reputation to fumble and come crashing down.

Let’s go back in time to a classic case of PR crisis which had all the drama a brand could ever face. Tampering of products, unknown perpetrators, shocking innocent deaths, rage among the consumers and a brand value being criticized in the media. It was in the fall of 1982, when Robert Andrews, assistant director for public relations at Johnson & Johnson receives the first news of the impact. He quotes,

“We got a call from a Chicago news reporter. He told us that the medical examiner there had just given a press conference-people were dying from poisoned Tylenol. He wanted our comment. As it was the first knowledge we had here in this department, we told him we knew nothing about it. In that first call we learned more from the reporter than he did from us.“

This was one of the grave crises for a brand like J&J. On the face of it when the word got out, the sensationalizing nature of the media reporting covered all the aspects to make it a deadly affair. The consumers were obviously not happy with the brand because the first impression people had was that the bottles of Tylenol capsules from J&J were the cause of these mysterious deaths in and around Chicago. Seven people were reported dead and the root cause was sourced back to the adulteration of Tylenol bottles in few Chicago drug stores with potassium cyanide.

J&J chairman, James Burke played an important role in handling the pressure situation. He formed a strategic team of seven PR crisis mitigation executives whose primary and secondary motive would be to save the people and save the product respectively. The agility of their mitigation manoeuvre showed in their first action as they alerted the consumers across the nation through the media not to consume any type of Tylenol product.

J&J immediately rolled back all the Tylenol bottles from the drug stores of Chicago and issued an internal order to stop producing and advertising Tylenol. From further examination, they found out two more contaminated bottles, so they decided to roll back the entire nation wide stock of Tylenol from the stores which was worth millions of dollars. They made an extra effort to connect to the audience as the shocking death news was all over the media. They took to paid advertisement and PR campaigns to communicate with their consumers.

In the first week of the crisis itself, they set up a hot line for their consumer relations where they entertained inquiries, questions from their customers and answered them with clarity. They also set up a toll free line for media houses to relay pre-recorded crisis updates so that it became easier for the media houses to be quick in relaying the information. They organised multiple press conferences where Jim Burke himself went on to the national media and spoke explanatory to the masses about how J&J had become a victim of an ill-fated crisis.

Due to their honesty with the public, clarity in communication, willingness to overcome the crisis and quick strategic PR execution, Johnson & Johnson not only started gaining the trust back from their consumers but in the process of investigation they also managed to establish good relations with the federal agencies and media. J&J up-ed their R&D and within a year re-launched Tylenol with a triple sealed pack which would prevent drug tampering in any case. They also replaced capsules with capsule like tablets as the former were an easy prey to the tampering. With their strategic branding, J&J gained back their market share which had fallen four-folds after the crisis. In the act to show goodwill, they even counselled and provided financial compensation to the families of the deceased even though they were not responsible for the crime.

J&J perfectly used the act of remediation and rectification to gain the sympathies of their consumers back. In this particular case of crisis, since J&J already had a solid reputation among the masses, the recovery was substantial with their agile moves.

Till date, no one was convicted with a sponsored set of evidence for these mass murders although a few of them were suspected. This was a clear crisis of terrorism which may have been ignited by one of the competing rivals of J&J or a psycho killer! Who knows!

But what we do know now is the importance of a quick PR crisis strategy which even Johnson & Johnson realized after they were hit by this threatening catastrophe!

What do you think about this story of PR crisis and mystery murders!? Do let us know in the comment section.

Latest posts by Raman Kumar (see all)
2019-08-08
Previous Post: Article 370 and Article 35A revoked: A new phase in the Indian Constitution
Next Post: A “State” of panic