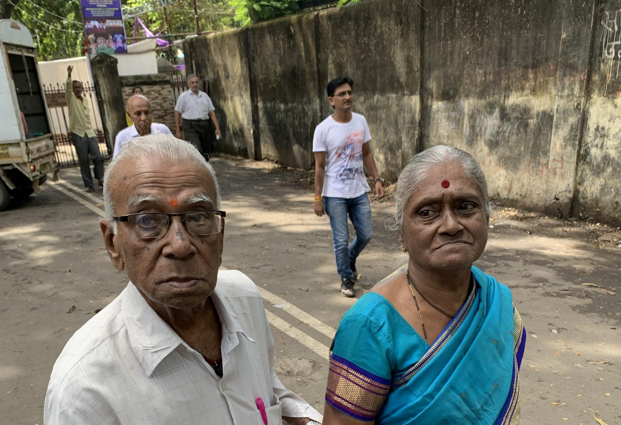 During the late morning hours, people walked into the St. Xavier’s high school at Vile Parle to cast their votes for the 2019 Maharashtra state assembly elections. People from all ages and economic backgrounds flocked in together, among them senior citizens Anildada Parab and his wife Ganga.

During the conversation, the couple said that no political party or leader makes the effort of approaching the poor about their grievances within the constituency. “We are old and poor people, so no political party comes to us with their campaigns as they do not bother about our problems.”

In contrast to the situation of Anildada and his wife, senior citizens Sambhaji Rane and his wife Gayatri, seemed impressed by the government’s work so far.

“We live in a good locality and safety is never an issue. The roads are well maintained and the area is clean and free from diseases. We would also like the youth to stop opposing the metro rail as this is quintessential for the development of the state. Future generations must understand the benefits that come from its construction.

The BJP seem to have dominant support in this area, with citizens belonging to middle and upper class backgrounds generally happy about their situation. This is what makes the chasm between rich and poor all the more glaring.

Latest posts by spiceenquirer (see all)
2019-10-21
Previous Post: These guys are NOTA Voters!
Next Post: Voting and its attendant satisfaction in Vile Parle