Why Face App was Trending

Opening my Facebook as part of my routine, I realized that my newsfeed was inundated with friends and acquaintances who seemed suddenly to have aged.  Rather drastically. Was I in a self-induced coma? Did I time travel like one of those sci-fi movies while I was asleep? Or am I turning into Benjamin Button and ageing in reverse?

I researched this phenomenon and stumbled upon a new trending app that seemed to have captivated everyone’s interest.  The elusive Face App. For those who may be living under a rock, the Face App is a popular free app that would put Harry Potter to shame.

It performs a bit of digital wizardry and allows one to edit selfies (their own or others) into a younger or older version of themselves. This Artificial Intelligence-based photo editing app went viral in 2017 and is back with better effects. Basically, it upgraded itself!

The App predicts in a realistic way your future self or transports you to the days gone by.  You can artificially add a certain look or feature and even do a gender swap. There’s also a premier version being offered at a subscription cost called Face App Pro.

The results though not accurate are convincing enough to satisfy the narcissist within us.  What is it about this app that has everyone trying it out? Every celebrity, be it a movie star, our national Indian cricket team, to the gully cricket boys, from Katrina Kaif to Kapoor aunty next door, absolutely everyone is endorsing an older or younger version of themselves.

Fascinated with the possibilities I downloaded the app as well. The results though highly convincing are hilarious and I was envious of my 70-year-old self.  Face App – unlike you, I didn’t share the results, but you made my day.

What is it about this app that is so addictive that even 5-year-old Guddu wants to sport a moustache and turn into a man? It all boils down to the fact that mankind has always been obsessed with the future. Our innate need to know the future stems from the fact that if we know what’s going to happen then we shall be better equipped to chart the course of our actions. If the future is known, then we can control it. It is a classic case of escapism.

Astrology, tarot reading, palm reading are all popular due to this need. We don’t want to sit back and let life chart its own course.  We always work towards examining, analysing and sequencing events, to objectively determine a pattern to work on things thus granting ourselves the ability to control our lives.

Another aspect is how our society encourages and feeds self-obsession. It’s all about us. Face App manifests that feeling. Would you ever look like the way Face App portrays you in the real world? Absolutely not.

I saw a beautiful older version of me. Craftily created to make me look graceful & stunning. If it showed me the real me, I would probably be a heavier, balding, partially blinded and a not so happening cool version of myself. It achieved at hitting the right notes of self-obsession. A euphoric feeling of old yet modern.

An example of such trends is the Fidget Spinner. When launched, it was trending and it was picked up from the shelves faster than they could spin. They spun out of memory just as quick as their entry. This is a world of short attention spans. Everything is fast, spreads rapidly, multiplies quickly and disappears at lightning speed for the next best thing. Like a virus.

They are the cutting edge of consumer market indulging in superficiality. Something else is around the corner. This won’t last. Till then, I shall sit back, relax and be content with the fact that I will be a goddess at 70. Hope I am around to compare the actual me with the Face App version. Ah, I need another app to decipher the future on that one!  As I am writing this article I realize that the craziness has begun to evaporate already. 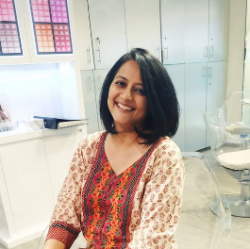 Renuka Raghunath
Renuka is a mother to a 16 year old, reinventing herself at 44. Formerly, a preschool centre head now aspires to set up her own media house. In order to make that dream come true, she is now studying advertising at St Pauls Institute of Communication Education. A vibrant personality who loves life and celebrates it everyday.