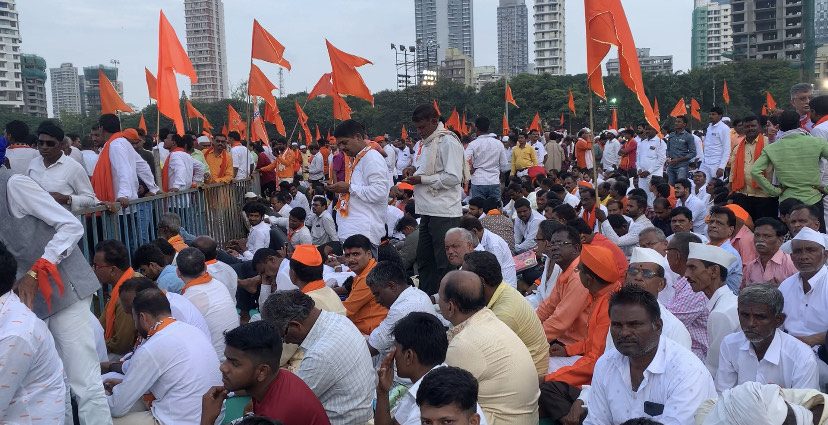 “Ravan has changed, he now has 50 heads”: Says Uddhav Thackeray

In a “call and response” format that drew an enthusiastic response from the capacity crowd (the police said it was 1 lakh), Thackeray asked, “How many heads does Ravan have now?”, and the crowd roared “Fifty”. This was a reference to the alleged bribe received by the defecting MLAs to change sides.

We were present at Shivaji Park to cover the event, starting with preparations going on from Tuesday. “Like all other years, this year also the ground is systematically organised,” said Suresh Sakare, a Shiv Sena karyakata. “We expect a house-full. You won’t be able to step foot inside the park tomorrow.”

And so, it happened. A flood of supporters had started filling up the ground hours before the rally was scheduled to start. Many slogans of unwavering faith like, ‘Uddhav Thackeray tum aage bhado, hum tumharey sath hain’ were raised.

We, ourselves, followed a small group of people, who created a pathway from Dadar station to Shivaji Park, and seemed to evoke considerable amusement among passersby, and policemen. The burden of the slogan was, “Neem ka patta kadwa hain, Eknath Shinde …. hain!”

When asked if the organisers had trucked people in specially, Tamanna Sattarkar, a karyakata from Sangli, along with other ladies, told us otherwise. “We have come willingly and at our own expense. We support Uddhav Thackeray because of his work during the pandemic. His policies reached and helped us.”

In addition to the sea of saffron in the whole of Dadar, demonstrators brought along their cultures and beliefs to the park. A group of women walked inside the park boldly with a mashal in their hands. “We brought this mashal from Tuljapur Mata’s Mandir as a blessing for Uddhav Thackeray,” said the ladies in saffron sarees.

A seething anger was seen among people. Many said that they felt completely betrayed by the defecting MLAs, CM Eknath Shinde in particular. Audacious and abusive slogans were hurled at him. One of them being, “50 khoke, baki sagla ok” (50 crores, so everything is okay) – alluding to the allegations of the defecting MLAs accepting money from the BJP to switch parties.

Uddhav Thackeray lambasted the Shinde faction for betraying him when he was at his “most vulnerable”. He said that his doctors had advised him against bending down. However, out of the love that he bore his supporters, he bowed low in front of the crowd, taking the help of two people to do so. Before Uddhav Thackeray spoke, former environment minister in the state cabinet Aditya Thackeray, spoke about the loss of the FoxConn Vedanta project to Gujarat, a loss of Rs. 1.54 crore to the state.

Interestingly, we overheard several people talking about the way the issue had divided families. Several talked about members of their own family attending the Shinde rally at BKC.

This year as well, the Ravan was the traditional figure with 10 moustachioed heads. However, it was designed as a blocky graphic, made up of ten cartons, with the body carrying the number 50. This was later set ablaze.

The crowd dispersed in an orderly manner. Obviously, they were following the instructions of large posters which could be seen everywhere. “Shistith chala” they read. (Walk with discipline.) And they did.

Latest posts by spiceenquirer (see all)
2022-10-07
Previous Post: At BKC , the numbers were huge, but is this the “real Sena”, people ask
Next Post: A Youth Sandwiched Between Distance and Isolation